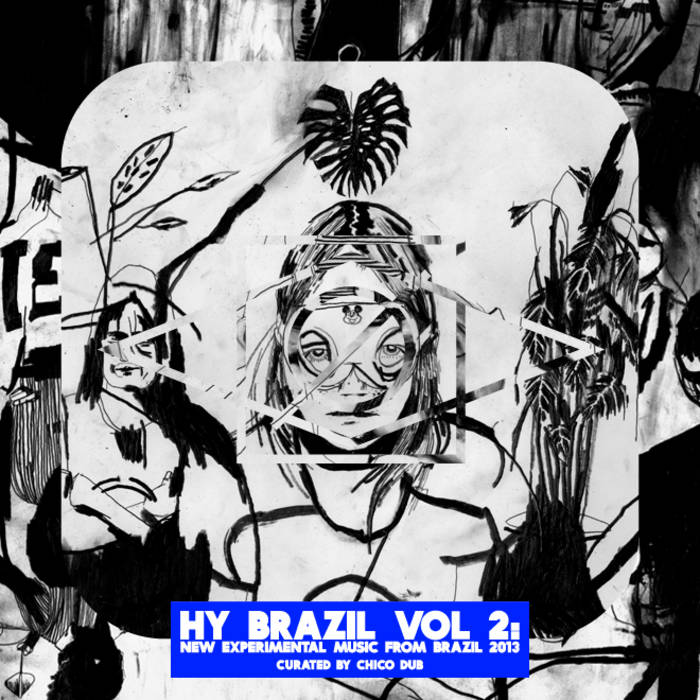 New Experimental Music From Brazil 2013 is the second volume of Hy Brazil, a series dedicated to compile the new Brazilian music with the aim of promoting it locally and abroad. Just as in the first volume (Fresh Electronic Music From Brazil 2013), the compilation gathers 14 previously unreleased tracks from 14 new (or nearly new) “Made in Brazil"projects.

Much more interesting than joining them in groups for reasons of aesthetic affinity (musical genre) or geographical frontiers (six Brazilian States were included in the compilation), is to point out several points in common that they establish among themselves.

Formed longer than the others, Barulhista, Satanique Samba Trio and Duplexx are certainly already well known to the public and the especialized critics. Those artists were included because they are in their best career phases.

Sobre A Máquina, bemônio, DEDO and Chinese Cookie Poets (and others who did not fit in this volume) are part of something very exciting that has been happening lately in Rio de Janeiro. Unfortunately there are (still) few music venues in town, but the pace of live presentations has been hectic and exciting.

Speaking of live shows, some of these artists have never played live (Camel Heads and Gimu, for example) or it’s not a priority (Babe, Terror). On the other hand, DEDO and Keroøàcidu Suäväk broaden the question of live shows and flirt with performances and rituals, acting at galleries and events normally associated with contemporary art.

Gimu, an artist who’s been making music since the 90’s (but with different configurations and objectives), Camel Heads, The Industrialism and Babe, Terror are already quite articulated internationally, having launched several titles abroad.

Barulhista and Satanique Samba Trio, each in their own way, work with regionalisms and popular rhythms expanding the possibilities of the instrumental music developed in the country.

The works of DeCo Nascimento, Iridescent Life, Industrialism and Babe, Terror also indicate a strong trend. They make broad music, sometimes going to a chain attached to most experimental music umbrella, and sometimes to the electronic music one. A (good) sign that these two giant worlds have been crossing lately.

The next Hy Brazil will return to the electronic music discussed in the first volume, bringing over unreleased tracks by 14 new artists.

The work of Rio de Janeiro’s Sobre A Máquina quartet is characterized by the exploration of recording and performance process towards improvisation, but also by obtaining unusual tones from tape loops and processed instruments. The group’s music is at once synthetic and organic, built under the influence of groups and artists like Throbbing Gristle, Einstürzende Neubauten, Autechre, Ornette Coleman and Can. After releasing three EPs in a range of just over one year (Decompor, Areia e Anomia), Sobre A Máquina launched their first full album (self-titled) at the very end of 2012. Gathering improvisation, free jazz, noise, drone, post-rock and industrial, is certainly one of the most exciting and plural works of the new Brazilian music.

Gimu is the solo drone, ambient, field recordings and sound-sculpting project of Espirito Santo’s Gilmar Monte, from former bands Primitive Painters (indie-rock) and Terrorturbo (electronic). Now Gimu works solely with the computer creating wall of sounds meant to get – and keep – the listener sucked inside. Gimu’s is a very prolific artist: his body of work on his Bandcamp account lists about 18 different releases between 2010 and 2013, albuns and EPs.

With physical releases for British imprints (Heat Death, Twisted Tree Line, Childrenplay, Rural Colours) and the Brazilian Toc Label (the cassette all the intricacies of an imaginary disease), Gimu also runs, together with the US poet Emily Loren Moss Ferrell, Caterpillars Dressed In Their Finest, a project that mixes spoken word poetry with drone and ambient.

Local famous indie-rock journalist Lucio Ribeiro sums up the project of São Paulo’s Claudio Szynkier like this: "Imagine a ‘Walking Dead' kind of zombie hiding in the catacombs of a Berlin club who suddenly finds a couple of decks and try to touch everything at the same time." In other words, Claudio creates cinematic-absorbing electronic stories, echoes of 50's pop, tropicalia, indie-dance and cold wave.

Babe, Terror’s work has already been reviewed by The Guardian ("Tropicalia with a noisy twist") and is a Erol Alkan’s protégé, who released, trough the Phantasy label, his albums Knights (2012) and Clash Collage (2013).

"Queimo" is a preview track of composer and sound artist DeCo Nascimento’s Under-Bending EP. Composed from analog synthesis, its structure is based on a sculptural process that seeks to organize sound in the listening space. The piece fluid’s nature proposes an immersive experience with synthetic and electronic elements.

Deco Nascimento is from Recife, the capital of Pernambuco, a state in northeast of Brazil. Building a relationship with sound, in 2008 DeCo was invited to study Visual Arts and Multimedia at the San Carlos Faculty of Fine Arts in Valencia, Spain, being his first contact with the universe of sound art, net art, installations and soundscapes.

Iridescent Life is a drone and ambient techno project by São Paulo’s Victor Lucindo. So far he has only released Leave No Trace EP (2013), by the In Step Recordings’ net label (which also features new artists and Rampazzo Albatross) first release.

The EP tracks were born like unpretentious exercises, from simple concepts and an extreme desire to record a moment. According to Victor, "leave no trace'' is an important concept in the Zen Buddhism philosophy – simply let go of results and erase yourself in the process. "These tracks were not originally designed for any type of project. They purely have come into existence."

Influenced by artists like The Flashbulb, Aphex Twin, Akira Yamaoka, John Frusciante and Venetian Snares, The Industrialism – the artistic pseudonym of multi-instrumentalist and composer Cesar "M1A1" Alexandre from Rio de Janeiro –, brings together elements of ambient music, IDM, drum & bass, glitch, breakcore and downtempo. The Industrialism emphasizes melody, atmosphere and emotion with an extensive use of field recordings and the merging of acoustic instruments with electronic processing. The result is minimalist and melancholyc.

Cesar has been disseminating his work on the web since 2008. Some of his records were released by various net labels such as Chase Records (France), Enough Records (Portugal) and Bump Foot (Japan).

Dotonbori is the name of his latest EP.

Camel Heads is the guitar drenched project of São Paulo’s Bruno Borges –also known as Pena Branca due to his (psychedelic) work as a visual artist. "I play, I record and produce everything in my house alone. Lo-fi without fear. "

Camel Heads has released two EPs. Anoluz (2013) is stoner / krautrock and his self titled record (2012) release sounds like a desert blues jam. Anoluz was released on cassette by the Mexican Department Tapes label and is going to be released on vinyl by Captcha Records. The next Camel Heads album will still keep a psychedelic vein feel to it, but it will be more introspective and meditative.

Minas Gerais’ Barulhista press release is so good that nothing else should be added to it. It says it all and it goes like this:

"Barulhista is an 'invented' word picked to end the search for a name for what I am / do: music / writing / talking / concert / soundtracking - all based on everyday experiences. I recorded my first K7 tapes at age 12, full of yard noises and a few cans. I was in some rock bands as a teenager and was a drummer for other styles too. In 2008 I left rock and roll behind started making music alone - using tape recorders, objects and an old battery. My work tools are: laptop + drum kit + objects."

Barulhista also plays accordion in the instrumental band Constantina. Together with Daniel Nunes (Constantina’s drummer) he runs the Lise + Barulhista, an experiment design in electroacoustic music for performances and soundtrack compositions.

Created by arranger, instrumentalist, producer and main songwriter of SS3, Munha, in 2002, the project aims at challenging the sacral rites of MPB (Brazilian Popular Music). That is to embrace the information overload trend and untangle the cliches and pitfalls of instrumental music.
Satanique Samba Trio has four albums. At the moment they are finishing the last chapter of Bad Trip Simulator trilogy, a record fully dedicated to music of Brazil’s Northeast.

DEDO arose within the design office of a well known Rio de Janeiro clothing brand. Sharing the same obsessions around music and image, the collective members felt the need to vent and explore other ideas outside the corporate environment. First they started making zines and later, after one's member birthday in early 2012, DEDO’s musical facet was born (with Lucas, Rafael and Arthur).

Duplexx is the experimental music project of Bartolo (synths, guitar) and Leo Monteiro (drums, synths and electronic percussion). The duo (Orquestra Imperial, Gal Costa's new album) has always focused their performances and compositions in electroacoustic universe, either with computers and databases or prerecorded instrumental performances, including circuit bending and analog synthesis. Over the course of almost ten years, they held several partnerships with other visual artists and groups such as Chelpa Ferro and Rabotnik. Duplexx performed at local Multiplicidade Festival (2006) and the internationals Being in Motion (London, 2006) and Nomads + Residents (New York, 2011).

Keroøàcidu Suäväk is a project of sonic and performatic experimentation created in 2009 in the city of São Paulo by visual artists Kaloan Meenochite, Pilantropov Pausanias and other collaborators. The group uses various resources such as acoustic and electronic musical instruments, multimedia installations, visual projections and ritualistic costumes. They mainly explore experimental music and dance, creating sonic situations that bring to mind ancient rituals mixed with technological devices and other random references. Keroøàcidu invented a folklore in which the public itself sometimes works along, building fragile experiment networks using instruments, chants and often joining in a spirit of celebration and ecstasy.

Keroøàcidu Suäväk has participated in festivals and contemporary art exhibitions in and outside Brazil, which include: the 30th São Paulo Biennial, Fabrique the Rêves (France), Neo-Tropicalism - Brazilian Art in Constant Mutation (Liverpool).

Chinese Cookie Poets are an instrumental music trio formed in mid 2010 by Marcos Campello (guitar and guitar), Felipe Zenicola (acoustic and electric bass) and Renato Godoy (drums). They present themselves in two formats: acoustic and electric – despite having radically different aesthetic, they somehow manage to keep the “CCC sound”. They have a gift when it comes to changing from improvisation to playing their complex, “airtight” arrangements: they’ll do so and one won’t notice when that change is going on. Simply inexplicable. Noise, improv, free jazz and no wave are some of the tags commonly associated with the trio.

After two EPs and a single, the first full Chinese Cookie Poets album, Worm Love, was released in 2012.

bemônio is a project created by Paulo Caetano in 2012 in Rio de Janeiro. Full of noises, distortions and feedbacks that follow the aesthetic patterns normally associated with drone and dark ambient, bemônio has the intention to generate a dense atmosphere and cause severe discomfort and trance, inducing the listener to transport themselves to a ritual or some kind of cult.

Last year bemônio released last year the Vulgatam Clementinam and the Eps Ascoltare During Il Pranzo Dopo La Noia and Serenata, the latter in partnership with drummer (and now member of the project) Gustavo Matos (Dr Pickles, Driving Music and Cabaret). A new EP, Opscuram, should be released soon.