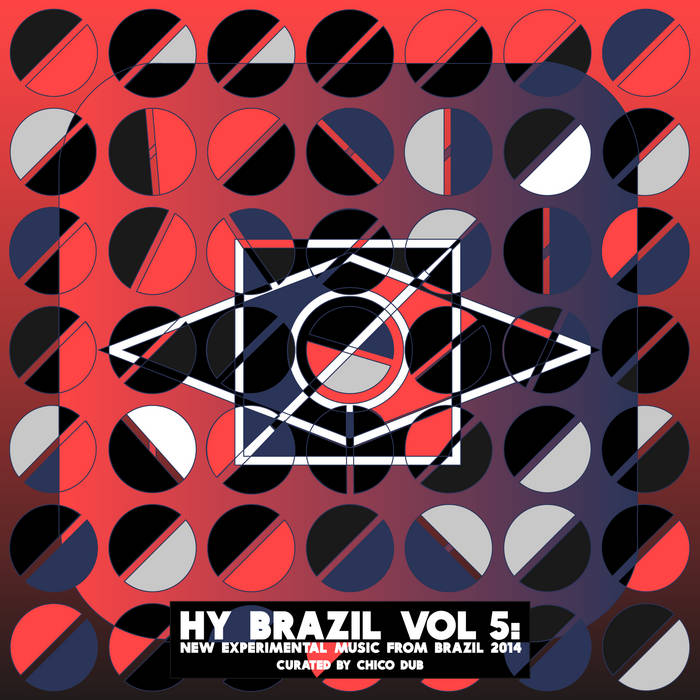 Hy Brazil is a compilation series that aims to map and promote the new music produced in Brazil focusing on electronic and experimental sounds. The formula of each volume is always the same: 14 unreleased tracks by 14 new producers across the Country.

Released last year respectively in March (via Spin), April (via Dummy) and May (via Resident Advisor), the first three volumes were widely covered in local mainstream media (O Globo, Estadão, Gazeta do Povo) and specialized international websites such as Tiny Mixtapes and FACT. The latter even elected the second volume (dedicated to experimental sounds) as one of the 20 Bandcamp best releases of the year. In 2014 are scheduled one more experimenal compilation, plus another that

The 4th volume was released by Spin in March 2014. And beyond this fifth volume that you now hear, premiered by Tiny Mix Tape, until the end of 2014 are scheduled collections investigating the “canção” (songs sung in Portuguese) and music made by foreigners residing in the country.

Ricardo Donoso is a composer, percussionist and electronic musician from Rio de Janeiro who currently resides in the United States. A prominent figure in Boston’s experimental scene, Donoso is a drummer for the avant- metal band Ehnahre and performs, along with Luke Moldof, as the noise and drone duo Perispirit. He also controls the Semata Productions label and promotes concerts and festivals involving several artists .

His first three albums, all of them released by Digitalis – Progress Chance (2011), Assimilating The Shadow (2012) and The Iron Sharpens Iron, One Verse Sharpens Another (2013) – were widely celebrated by specialized vehicles such as FACT, Clash and Resident Advisor. His music is an anti-techno where polyrhythmic synths promote pulsating and meticulous textures, at the same time dark and euphoric. In other words, imagine listening to a goa or psychedelic trance track but without the 4x4 beats.

An exclusive track for Hy Brazil, "Oneiric" sounds quite different from the old Donoso material. It's an outtake from his new album scheduled for September.

Ceticências is a noise-techno project from Rio formed by Cadu Tenorio (Sobre a Máquina, VICTIM!) and Savio de Queiroz. The duo uses a combination of field-recordings, obsolete equipment and high technology to compose a sound that is both aggressive and transcendent.

"Instrumental rock sounding raw casted on metal, marrying violence and polyrhythmic going to complexity to minimalism, often in the same song." That’s how Elma defines itself, a São Paulo quartet formed in 2002 by Fernando Seixlack (drums), Ricardo Lopes (bass), Paulo Cyrino (guitar) and Bernardo Pacheco (guitar). In these 11 years of activity the group released few but important works that put them among the most respected artists of the São Paulo heavy sound – one demo in 2004, an EP in 2006, an album of remixes/ deconstructions of Elma songs by other artists and 2010 and the first album in 2012.

Drummer with a predilection for experimentation (whether rock, jazz, hip-hop or electronic), Takara is a member of the bands Hurtmold, Instituto, São Paulo Underground and Ekundayo. He also has two solo projects: M.Takara and Mundotigre, the latter dedicated to electronic compositions. In addition to the mentioned projects, Takara also participates in many artist albums and gigs such as Otto, Nação Zumbi, Marcelo Camelo, Tortoise, Fugazi, among others.

For the Hy Brazil series, Takara sent a song that is part of a recorded session with Kassin (+2’s) about 5 years ago.

Auto was formed in the late nineties and released three cassettes with studio sessions and live recordings at the São Paulo venues that welcomed the hardcore scene. Auto also catalyzed influences of its members coming from important bands of the indie scene like Againe, Intense and Veracidad; besides seeing emerge from its ranks the chaotic Prendedor and Objeto Amarelo, which circulates and promotes experimental music in Brazil for fifteen years.

In 2010, with the return of vocalist Jonathan Gall, a New York native, the band – Carlos Issa (guitar, electronics), Marcilio Silva (bass), Marcelo Fusco (electronics) and Alexandre Amaral (drums) – has resumed rehearsals and compositions and has performed showing sound developments that mix minimalist electronics with acoustic instruments and experimental processes of improvisation and noise without abandoning the initial abrasiveness of punk rock that marked its beginning.

In July 2014 Auto will release it’s next album Crossfire on vinyl 12" and digital by Submarine Records. "The Woods" is one of five tracks that make up the album.

N0x3O (Noxtrinta) is São Paulo’s Rodrigo Florentino, a project that operates in the field of experimental electronic music taking control of the structures and aesthetic of minimalist music, dark ambient and drone. Since 2004 he utilizes computer, guitar and some analogue equipments, many constructed by himself, to explore and materialize the unconscious feelings into music.

Rampazzo is Lucas Rampazzo’s electronic solo work, a graphic designer and photographer who lives in São Paulo. His work transcends the visual arts through the use of repetition and patterns. Both concepts are structured into introspective, minimal and atmospheric sounds and were first performed during an artist residency in Gallery Hommes (Rotterdam, Netherlands) in 2010. Recently Rampazzo has participated in events of local electronic and experimental music.

Created by Jarrier Modrow, VHS Logos is an experimental, musical and visual project based on samples and settings inspired by nostalgic and futuristic elements. Initially conceived just for the Internet, VHS Logos has some fans in various corners of the world, such as Japan, Russia, USA and Europe. The project is present in some compilations and mixtapes, and the first album with new songs is due to release soon.

Coming from a metalcore band in which he played for 15 years, Kbral Silva set up the experimental/ electronic/ drone project Albatroz as a way to not miss his musical feeling and end up staying away from production and song composition.

His first release, King Diamond Ep Part 1, came out in September 2013 by Step In label. This November he will release a new album who will feature N0X3O.

-notyesus> is an extreme electronic music duo formed by Rafael Sarpa and J.-P. Caron. The project emerges from the coalition of taste for extreme audible aspects such as physical impacts of intense and immersive soundscapes and expansions in time perception.

The track sent to Hy Brazil was extracted from a live performance performed by -notyesus> at Plano B in 2007. It was their first collaboration with Henrique Iwao, a composer who later would form Epilepsia with J.-P. Caron. About the track, Caron says: "Ironically, the result does not sound like -notyesus> or Epilepsia. The title refers to dub music. The track is dedicated to where it was recorded, the late Plano B venue, which closed it’s doors January this year. Many of us grew up and, somehow, were born there."

Fluid Druid is a project conceived by São Paulo's Thiago Miazzo, someone who operates in the experimental scene under a multitude of projects ranging from harsh noise to drone. With a focus on world music and "trance music", Fluid Druid was designed as a tribute to the surfing culture: obscure documentaries (Cosmic Children, Crystal Voyager, Storm Riders, Tales From the Tube, among others), Summer Games and “whiskey caiçara”. His first album, Wave Rave, is scheduled for the second half of 2014.

The track "Rain", composed exclusively to Hy Brazil, is made with real sounds of rain, wind bell and water pressure in the home barrel in order to build an image/ situation of a storm.

Projeto Mujique emerged in 2010 on account of the music mental obsession by its creator. Electronic beats, samples, synths, digital apps and voices captured by the Internet are the foundation of his music, trying to make a retelling of traditional rhythms like samba and congado, and modern rhythms, like rock. Tradition and modernity, order and chaos, the Brazilian and the universal are opposites that combine to generate the sound of Projeto Mujique.