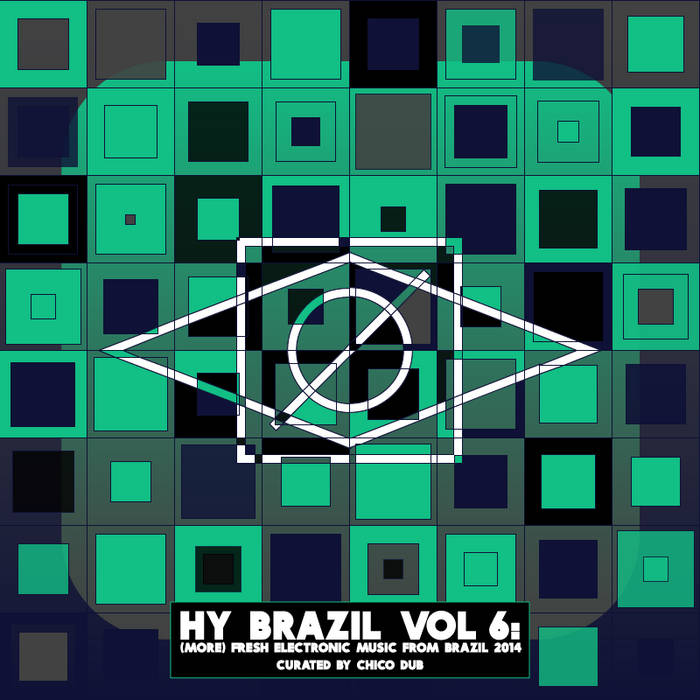 Hy Brazil is a compilation series that aims to map and promote the new music produced in Brazil focusing on electronic and experimental sounds. The formula of each volume is always the same: 14 unreleased tracks by 14 new producers across the country.

Released last year respectively in March (via Spin), April (via Dummy) and May (via Resident Advisor), the first three volumes were widely covered in local mainstream media (O Globo, Estadão, Gazeta do Povo) and specialized international websites such as Tiny Mixtapes and FACT. The latter even elected the second volume (dedicated to experimental sounds) as one of the 20 Bandcamp best releases of the year.

The 4th volume was released by Spin in March 2014; the 5th premiered by Tiny Mix Tape one month later; and this one by Thump in late September. Until the end of the year are scheduled collections investigating the “canção” (songs sung in Portuguese) and music made by foreigners residing in the country.

Nicholas Amaral, 19, is a carioca who lives in the city of Cork, Ireland, for about three years. Having started producing just a year and a half ago, he has just released his first EP called Untitled by independent label First Second. A confessed fan of Night Slugs, his sound is a hybrid of techno and house full of vigor and gloomy textures, which he prefers to call UK bass.

Born in Belo Horizonte, the São Paulo based Lucas Dimitri is a singer, songwriter and multi-instrumentalist. In his Formafluida project he explores psychedelia on the beats and brings an organic, rich sound in vocalizations, percussion and guitars. With two EPs under his belt, Wunderlust (2012) and Multitude (2013), Formafluida unites strands like jazz, trip-hop, dubstep and glitch, resulting in a multifaceted and diverse overview of the current electronic music scene.

Represented by D-Edge Agency, Laercio Schwantes Lorio is the person behind the project L_cio. Already released music for Archipel, D-Edge Records, Underground Source Records, EX, Live at Robert Johnson, Aluku Rebels and others. Rodrigo Coelho aka grassmass is a producer and composer. Founder of UIVO Records, Coelho delves into the fusion between African percussion and modular synths. A Red Bull Music Academy 2013 Alumni, grassmass is at the moment preparing his debut album and a synth tribute to Moacir Santos. Worked with Arto Lindsay, INKY, Naná Vasconcelos, Cassady and others.

Newly drafted into the Red Bull Music Academy 2014 in Tokyo, Zopelar is one of most creative representatives of the new breed of live electronic music in Brazil. Most of his performances are based on improvisation and free creation. Without the use of computer databases or prerecorded audio, all sounds are generated by synthesizers and drum machines that composes the setup of choice, which makes every performance unique.

Márcio Vermelho is a resident at Freak Chic night in São Paulo’s D-EDGE Club and also at the itinerant projects Diamond and Laço, besides performing frequently at various clubs and nights in the country. Fond of house and disco music, his set wanders through many variations of these styles: funk, acid, deep, italo, electro-disco, breakbeats, nu disco, cosmic and discopunk. In 2008, he was invited by DJ and presenter Tim Sweeney (DFA) to participate in the cult radio show Beats In Space in New York. In 2012 his remix of "From Here To Eternity" (done in partnership with Lennox Hortale) won a contest remix of the classic Giorgio Moroder tune promoted by music portal Beatport.

"Character" is a system of relatively permanent characteristics manifested in the ways that an individual relates and reacts to others, to various types of stimuli and the environment.

A child whose creation and / or education are not ideal, living in a treacherous environment will be more likely to form a pattern of behavior that avoids the challenges posed by an evil social environment or "techno" as a form of expression worthy of their inner feelings and textures.

Hojer Yama is Carlos Issa’s, a musician and visual artist from São Paulo, abstract music project with influences from techno and noise. His first album, Vals, was produced and released in mid-2014 and includes five electronic pieces produced on a laptop equipped with synthesizers and virtual instruments. The second disc is called Mazda and explores repetition and arrhythmia in a noisy vision of densely occupied ambient music. The album have ten songs produced with an old analog groovebox processed by effect modules and saturated with distortion pedals and will be released later this year. The main influence of Hojer Yama is architecture, more specifically the work of the Swiss architect Peter Zumthor. The songs are inspired directly into his minimalist designs of interchangeable modules and abrasiveness of the concrete and the unadorned raw material.

An electronic music project coming from Brasilia combining modern and obsolete hardware synthesizers, Tranca Rua was born in 2013 thanks to a collaboration between Droid-ON (from chiptune collective Chippanze.org) and Ogro (Confronto Sound System).

Pesadão Tropical is a global bass project formed by three DJ's and producers from Pelotas/ Rio Grande do Sul (i.e. South of Brazil): Thiago Salvador, Nycksés (aka William Niches) and Tr1p (Henry Janelli). One of the artists from São Paulo’s Braza Music label, Pesadão Tropical promotes a fusion of funk, trap and tropical rhythms. The gaucho trio has its own style and is gaining recognition by several big names in the national and international scene, with some remixes and productions played throughout Brazil and also in sets by the German producer Daniel Haaksman on his Funkhaus Europe radio show.

Coming from Salvador, Bahia, Lord Breu is a DJ and producer who keeps his focus on the global bass music of tropical trends. Elements of the African-Bahian culture are common in many of his productions, wandering through trap, twerk, moombahton and bahia bass. His first EP, Futurafro, was featured in many specialized international media blogs such as Generation Bass, Mad Decent and Tropical Bass.

Telefunksoul is one of the biggest promoters of bahia bass, a new Bahian rhythm that is gaining new fans every day. So much so that one of the latest apparitions of his work took place in worldwide radio programs such as BBC 1's Stories and A Tropical Beats, both from London, Germany’s Luso Fm, among others.

TeleFunkSoul is also involved in projects like Sambatrônica and Mamãe Sacode and have performed in clubs like Lov.e, Overnight e Club Glass in São Paulo, Club 688 in Porto Alegre, Orbita Bar and Meireles in Fortaleza and Casa da Matriz in Rio de Janeiro.

A São Paulo resident, DJ Tide is a musician, sound engineer and a pioneer of the “cumbianchera” scene in the city. He began his experiments producing electronic music in 2011, creating cumbia and other Latin genres edits and remixes. Currently his work is more focused on the Brazilian culture with creative reinterpretations of the classic MPB (Brazilian Popular Music) and a deeper research into the elements of popular mass culture like pagode, axé and brega.

Recently received an invitation from the Mexican site Cassetteblog.com to release his first EP titled Tracacá, a tribute to two great masters from the State of Pará – Pinduca and Mestre Cardoso.

Uaná System is an audiovisual duo created in Belém do Pará by Waldo Squash (Gang do Eletro) and Luan Rodrigues that uses technology to merge the various visual and audio references from this parallel universe named Amazon. The duo takes to the dance floor a delirious tropical audiovisual journey, full of groove and psychedelia, where the tradition of Amazonian rhythms like carimbó, siriá, lundu, cumbia and guitarrada, are fused with the energy of electronic music.